When I was 9, I was a massive fan of dystopian sci fi comic, 2000AD. While most of my friends were opting for “Dennis the Menace” in the Beano, I preferred Judge Dredd. For those who don’t know, Dredd is an absurd, neo- con merciless macho uber cop, who shoots first, and never asks questions. Because the whole thing is so camp and absurd, it isn’t so awful. Well, possibly for 9 year olds it is. Liberal parents and all that.

Judge Dredd had an aged contemporary, called Judge Minty. You can read a little about him here. Minty’s analogy sort of works regarding current events. Plus I have an insane ram called Minty, who likes to eat my trousers.

I like analogies because they can convey a lot more in a sentence than a book can. Plus I can ramble about stuff that is important to me, and not to you.

So I have, like Judge Minty, done the “long walk” -leaving behind so many teams and great colleagues. I may have become tired of what social work has become, and from managing my home life parallel to it, which was often worse than what I dealt with in child protection. Straight up. But I never tired from having some great managers and team buddies. I find myself wandering around my house, looking at all the various team photos and leaving cards I never can throw away. We did so much heavy stuff together. Its more than a job.

I will get more specific about what my wife and I (and some very cool other people) are doing with Shabbafarm on here soon- watch this space.

All that- the stress building up to leaving , and the fallout arising from leaving, have kept me from blogging. In the free time I have had, I realised I didn’t have very much to say that was either positive, or very well written. Or both. And I’m always processing all the stuff I have written about in previous posts. My son comes home very weekend, and on the whole its getting more and more positive. However, the ways I need to change overwhelm me. I was zoning out as a way of not dwelling on it. I spent so much time on my gaming console I’m likely to sell it and never go back.

The work needed on the smallholding ahead deserves a separate post. In lieu of my sizeable income missing, my wife has virtually gone full time in her midwifery- but there is a shelf life on her doing that. I often joke that she comes back from shift looking like a zombie nurse from the Walking Dead. It really encourages her.

I need to get a part time job, so at least we cover livestock feed.  I’m pretty much looking for what Amitai Etzioni calls a “McJob”. Currently I’m gunning for a zero hours contract coffee shop job at the moment.

But do you know what? Wouldn’t change it for the world. Transition is painful, and worth it.

I want to leave on a funny note. My last team were awesome, and at a great final curry, they gave me this “life story” book (see highlight photos) I keep it in a special place and re-read the comments. I didn’t cry when I got it, but I do now! 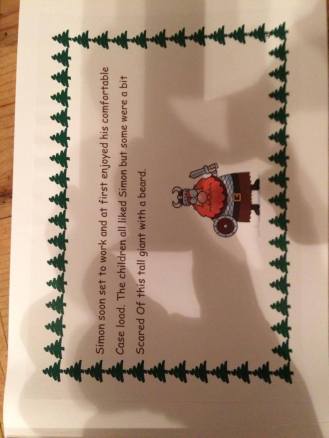 Tune in next time!